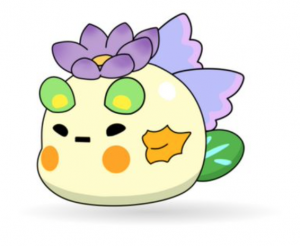 In a nutshell, Chives Farm is a kind of Tamagotchi on a phone that is visually similar to Pokémon and AXIE and has some Hearthstone combat strategy mechanics. A bit confusing, isn’t it? I thought the same when I heard about this project. Combining 4 different mechanics into one game, even partially, is quite a bold decision.

Actually there is little information. Developed by the Chives development team. Animals, the so-called pets, will be available in the game. The developers write that animals are unique and each of them has four characteristics (health, speed, skills, morale) and six different body parts (eyes, ears, feet, mouth, back, tail). In addition to the characteristics and visual difference, pets belong to one of the categories of attackers, defenses or speed categories (it is not yet clear what exactly is meant). All these data are required to form a team of 3 pets and participate in PVP or PVE battles. There we earn tokens that in the future can be withdrawn into real money or spent on breeding pets. Yes, they can be bred like a Tamagotchi. Any two adult pets can breed, but cannot do so between close relatives (parents, siblings). The process takes about 5 days. The characteristics of a new pet are obtained randomly according to a given probability. According to the rules of the game, each pet can give offspring up to 7 times. The developers also got confused and introduced such a thing as reproductive inheritance. If I understand correctly, each little animal has 3 control genes: a dominant gene (D 37.5%), a recessive gene (R1 9.375%) and a subrecessive gene (R2 3.125%). Given the randomness and given control genes, pets should indeed be unique.

According to the developers, the game will directly promote the application and popularization of major products such as “(USDT), tokens (ERC20), NFTs (ERC721), automated exchanges (AMM) and mobile wallets”) on the CHIVES blockchain.

After the release of the game, the sale of pets will be limited. It is planned to sell no more than 1000 pets per year.

The game is currently under development (closed alpha). The developers plan to release a beta test of the pet combat features in May and an update to the pet battle feature in September that allows you to switch between different maps.